The cabin was under 500 yards away, after the distance the two had covered from bumbling about, or had purposefully come upon. It was situated underneath a stand of pine and fir trees, but with almost total view of the area around. No one could make a sneak attack on this place. What it seemed to lack in defenciblity, it had in the position of awareness.

From the outside, it appeared to be an abandoned camping cabin, or a small vacation spot. The logs were stacked loosely, with the clay having come from between them in areas, leaving holes for the wind to cut through. Many winters of snow and bitter conditions had left the wood rotting and decaying. Whoever built it was no contractor, either.

It was what was under the floorboards that would suit their purposes, though the entrance was hidden well. They would be able to hide out from the storm safely in this subterranean outpost.

(OOC:Not doing all the work for you two, describing or putting pictures up! Let imagination take over from here!

Miles stood with the King in the dingy little cabin, bare of furniture except a half-broken desk and two warped wooden chairs. He could tell that the green hedgehog wasn't impressed. This was a good sign; the front wasn't meant to be impressive in the slightest. Now, if only he could remember where the trapdoor was.

He dodged a faded, frayed rug in the middle of the room; it had been so long since he was here, that he had no way of remembering what sort of things could be under that rug. Best to have a few surprises, anyway. "Watch your step, your highness. This place is old and I can't assure the cabin's stability."

Lining the walls were a few tiny, worn portraits of the kings, former and current, of Moebius, roughly tacked on the wall without any frame. There was a little patch of cloth underneath each one, almost a respectful pedestal above which the photos floated. "Oh, which one was it, again?" he muttered under his breath, carefully studying each face. Then he smirked as he rested in front of the dusty, yellowing picture. King Scourge. He knelt down and pulled at a tiny hole in the wood, easily mistaken for a knothole. A large slab of wood lifted up, the fabric trapped behind it. It was dark, but he could barely make out the first step of a creaky wooden staircase. "After you, my liege."

<OOC: Gah! Sorry I'm so late. Been studying something major. But anyway, here's your post! />

The hedgehog rubbed at his nose as dust invaded his nostrils, irritating his senses and threatening to make him sneeze. He grunted disapprovingly at the less-than-stellar accommodations, far from the lap of luxury he preferred. If there was one major difference in how Sonic and Scourge were raised, it was the level of pampering Scourge was accustomed to as the son of a noble. This simply would not do, but it wasn't as though he had any choice until he could bust back into the castle. At the sound of Miles's voice, he raised a brow.

"That's more like it," Scourge acknowledged the title warmly, but not without his callous demeanor. He pushed the boy aside as he strode past with a smart grin, left hand falling to his shades out of habit. "See, if only you'd learn to use that kinda respect more often, you wouldn't be in this position now."

"Ugh it smells musty in here." 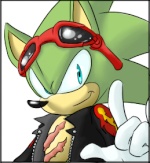 God, he hated that hedgehog.

"But of course, milord. This is a safe house. The whole point is that it's used in emergencies, somewhere to hide. It's not a cozy little place to spend an afternoon. I don't think I've needed to visit this place in months, at least." His tone was his usual suck-up voice, but he was happy the hedgehog couldn't see his sneer, his disdain, his curled lip in the dark, thin staircase. And, of course, the hedgehog was dense enough to miss the obvious sarcasm. Honestly, Miles wasn't surprised that he was deposed at all, just that it had taken everyone else so long to figure out how incompetent this green fool was.

He fumbled at the side of the wall and flicked on the light. If he remembered correctly, the safe house wasn't pretty, but functional, built more like a hangar than a home. He looked at the stacks of canned food lined up against the wall, the little kitchen, the concrete walls and floor, the high ceiling lit with dingy tube lights, and the expansive computer in the corner that looked so out-of-place with fond recognition. The little bit inside of him that hated uncleanliness cringed, but he hid it well. "The food is plentiful, the computer has access to the castle's system and is currently monitoring activity there via camera, bathroom's over there. Welcome to the safe house, milord."

True to his nature, Scourge stumbled somewhere near the lower steps, catching himself with all the grace of a trained professional. He drew his fist back, prepared to strike Miles in case he said a word, when the lights flickered on. Almost instantly, his hand flashed back by his side, no time for Miles's eyes to adjust to the light, but having been around Scourge all these years, he may have had eyes trained to notice that sort of fast movement.

He sniffed casually, shoving the fox as he walked by. His hands found his pockets and were stuffed inside. He observed the place, eyes searching every corner of the room, the ceiling, and the area Miles said held the pot.

"So this is like, what? Our own Freedom HQ? Or, now, Suppression HQ. Heh." It was simple, and not the luxury the pair were accustomed to, but it had a familiar scent and yet it was foreign to him. He dropped into the computer chair and propped his feet up on the desk. Snap, snap. He snapped his fingers and pointed to the top of the desk. "You. Get me a chilidog. Now. Make it two."

He knew the hedgehog wanted to hurt him. Painfully. Violently. Mercilessly. It was no secret to Myles that Scourge hated him. Then again, the feeling was mutual. He stood in silence and watched as the hedgehog plopped over in his - his - computer chair, and ordered him to bring food like he was some sort of cooking, cleaning lackey. Was he going to have to play maid to this slob of a Moebian?

He swallowed his pride - to save it for revenge later - and said, with undisguised venom, "As always, I am your servant, milord." Not for long, though, he told himself. Not for long. He went into the kitchen, pulled out an onion, tomatoes, meat, peppers, and other secret ingredients for making chili, and set to work. Myles decided to make enough for three days for a normal person - so that Scourge could make his own blasted "chili-dogs". It wouldn't last three days, but that wasn't his problem.

The hot dogs cooked quickly, and he smacked them each into a bun, slopped some chili over each, and carried the plate over to the computer table. "Your... 'chili-dogs', milord," he spat, silently daring Scourge to question them, or tell him to fetch something else, or spill even a little chili on his chair.

He cautiously watched each step that Myles had took, so that he didn't pull a sneaky trick on Scourge. His mind was riddling with wanting to hurt him in satisfying ways, so that today would haunt the other for eternity. However, Scourge had to also rely on him, even if they would end up being stuck in a crappy, revolting cabin. As he finally arrived, Scourge reached out and grabbed a chili-dog, chomping it down as if he hadn't eaten a single piece of food for centuries. Chili spilled down the hedgehog's lips and chin with every bite, tongue rolling within the contents to recieve a more accurate taste test. After some time, he suddenly slammed the chili-dog down to the plate, almost gagging, as it tasted putrid to the hedgehog.

"What garbage is this? Don't you know anything about cooking?" As his eyes had halfway went shut, he violently threw the plate away, the plate itself hitting the floor with a roaring thud. His hands shoved back into his pockets, as his legs were lifted up onto the dreadful desk. He leaned back and inspected at Myles, who was now starting to become more furious with him. God, how he hated that Fox.

He pointed at Myles, a serious look approaching on Scourge's face. "You. Do it again. Now." He looked back over at the sloppy mess from when the plate had been thrown, looking back at the other shortly after. "Also. Clean up this mess. Now."