After a long battle at the docks in the start of a late autumn torrent, swiftly turning a cold winter on its way, Super Sonic was forced into a situation where he could do little to enact the return of his new travelling companion, the alien Turbo. Turbo, captured both as prey and meat-shield by the mysterious, oft invisible Mange, who had yet to reveal name, identity, or personality to the duo.

It seemed like the rabid hybrid was going to get away, when Sonic the Hedgehog, prey and purpose of all three of the warriors for varied reasons, appeared on the scenes, with the intent to aid the rescue. How will the tides turn now???

He rubbed his nose once as he watched the scene from the rain-drenched rooftops of the warehouses, before jumping down into the fray, raggedy scarf trailing behind him in a graceful swoop. Yay drama! He loved bein' the center of attention!!!

"Oi! What's goin' o--" Oh, goldie here, he could tell in an instant was... was his Super side. There would be problems there, and normally he was quite afraid of confronting his inner demons, but here, he was outside, and Sonic had done his soul-searching. This would be a piece of cake, especially with Turbo here. Sure, the flake was victimized, but he was supposed to inspire the victims to rise up and all that good nonsense.

"Hey, Turbo, glad to see you left some of the action for me!" He gave him a thumbs up that was debatable exactly how sarcastic its origin was, before going after the freak who was dragging him off. Maybe they could have a Marvel team up and learn something cheesy about friendship at the end. "C'mon!!! I'm waiting here! You gonna keep playing easy???" Some things would never change... 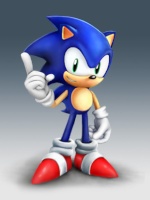 Turbo looked up, muzzy-headed from blood loss, but happy to see his friend and rival. "Sonic!!!" He weakly sat up, disregarding his wounds. Sonic was here! He had to prove he was better! He had to prove he was the best!!! With a struggle, he got back to his feet. Now that Sonic was here, he could just go straight to him and tell him about his little dilemma. The hedgehog might be a jerk, but he was still kind enough to help him with his problem before. Just the thought of being back home with his family gave him the strength and drive he needed.

"Of course!" He dusted himself off and straightened out, trying to convey the impression of laziness and battle-eagerness, even if he wanted to throw up and pass out. "Am I really that mean to deny you a good fight?" He gave a semi-confident grin. They'd get this attacker out of the way in short order.